Version 2.5 of Rad Timer™ for BlackBerry 10 has just been released over at BlackBerry World.

The big feature in this new version is the linked timer capability which allows one timer to automatically start another (or even itself) when it finishes.
This can be useful for things like the Pomodoro Technique, or for exercise and rest intervals, or as a reminder during the various stages of cooking. The uses are limitless! 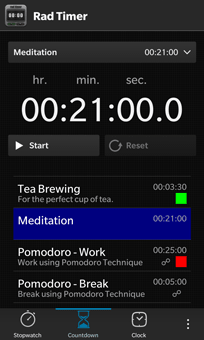