Version 2.0 of Call Blockr™ for BlackBerry 10 has been released at BlackBerry World, and now includes the long awaited ability to block (or only allow) specific phone numbers. This feature has only just become possible with BlackBerry OS 10.3.

Please Note: For those not using a BlackBerry Passport (or running OS 10.3), you will need to wait for the release of OS 10.3.1 for your BlackBerry device, before the Call Blockr v2.0 update is available to you at BlackBerry World. 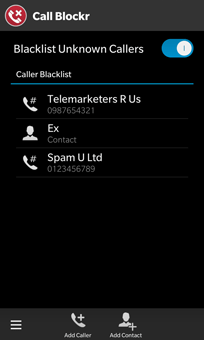