Charger Alert v3.2 for BlackBerry 10 has been released at BlackBerry World.

Among the improvements, fixes and optimizations in this new update, there is also a trial period of the Pro features for those using the free version.

If you haven’t upgraded to the Pro version yet, now’s your chance to try it out before making the switch! 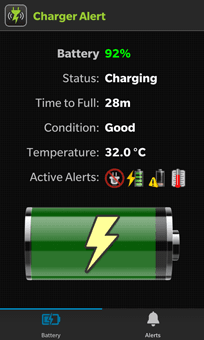